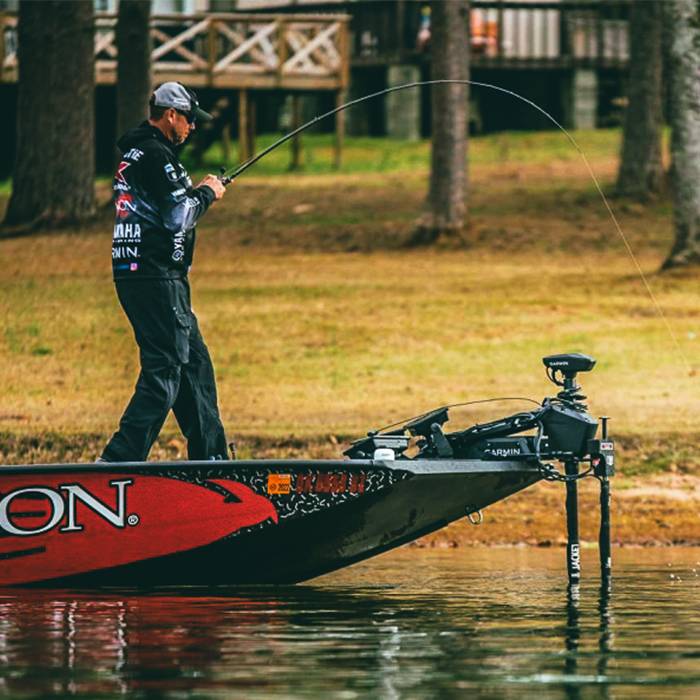 Registration will end immediately after 150 boats enter the tournament.

Load your boat and fish, then come get a bag. Do not use your own weigh bags.

Not enough weight to get a check? Release your fish for a chance to win $500 in our conservation drawing.

Make sure to read the fish care document that is included in your registration packet.

As Principal Chief, he has increased minimum wage at Cherokee Nation and Cherokee Nation Businesses and secured the largest language investment in the tribe’s history to expand Cherokee language education and preservation. Chief Hoskin also appointed the tribe’s first delegate to the U.S. Congress, doubled Cherokee Nation’s funding for career tech education, and established the Housing, Jobs and Sustainable Communities Act to repair hundreds of homes for Cherokees elders as well as public community buildings across the tribe’s 14-county jurisdiction.

Additionally, as Secretary of State, Hoskin worked to secure funding from the federal government to fund a billion-dollar joint venture investment in better health care for all Cherokees. He has also served as Cherokee Nation’s strongest advocate on sovereignty protection.

He formerly served as a member of the Council of the Cherokee Nation, representing District 11 for six years, and served his final two years as Deputy Speaker. On the council, he worked with his fellow council members to start building homes for Cherokees again, increased education funding and sponsored legislation to expand health care service through casino dollars.

Chief Hoskin has testified at the United Nations on behalf of the Cherokee Nation and serves on multiple boards and commissions, including the United States Health and Human Services Secretary’s Tribal Advisory Committee.

He was honored by the National Center for American Indian Enterprise Development in 2016 as one of the 40 Under 40 – a prestigious award that recognizes 40 emerging American Indians who have demonstrated leadership, initiative and dedication and made significant contributions in business and/or their community. In 2017, Deputy Chief Warner was appointed to the Tribal Advisory Committee for the Center for Disease Control. He has been credited with working with the Oklahoma Veterans Commission in helping bring the new Veterans Center to Sallisaw. While on the Cherokee Nation Tribal Council, he was an advocate for the Cherokee Nation Foster Care program and worked diligently to bring positive changes to his district.

Deputy Chief Warner grew up in Sallisaw where he spent much of his childhood at Blue Ribbon Downs, working with his family to train racehorses. He has a Bachelor of Science in biology and a master’s in education. In 2009, Warner started his journey at Carl Albert State College as a science instructor, teaching chemistry, biology, microbiology and botany. Warner eventually assumed the position of campus director at the Sallisaw campus in 2017 before being elected to serve full time as Deputy Chief.

He and his wife, Maco, make their home in Sallisaw. They have three boys: Kaden, Luke and Clayton. They are active members of the Sallisaw First United Methodist Church.

Speaker Shambaugh is a graduate of Jay High School and attended Oral Roberts University on a baseball scholarship. He was drafted by the New York Mets and the Baltimore Orioles.

He is a past board member of the Boys and Girls club, a participant in the Big Brother Program as well as the Mentor Program for Jay Public Schools. He is a current board member of the United Way for Delaware County and is a current monthly speaker for the Victims Impact Panel. He has also served as a volunteer coach for youth baseball, football and basketball and served as a lay coach for Jay High School’s baseball team.

Speaker Shambaugh is honored to have the opportunity to serve the Cherokee citizens of District 9 as well as the Cherokee Nation. He feels health care, education, elder care and the preservation of our Cherokee culture are priorities.

He has been married to his wife, Robin, for 31 years. They have two sons, Cayle and Kyle.

At the center of the design is renowned Cherokee inventor Sequoyah inspired in the Southeastern Woodlands design. He holds a tablet of his signature, shown as he signed it in historical records. Surrounding him is the wording “Presented to George Gist by the General Council of the Cherokees for his ingenuity in the invention of the Cherokee Alphabet.” George Gist was Sequoyah’s English name and was inscribed on the medallion he was awarded in 1824 by tribal leaders and worn by Sequoyah throughout his life. The image of two pipes was engraved on the back of Sequoyah’s medal and are displayed in the design. Seven stars represent the seven clans with one black star representing all Cherokee speakers lost to COVID-19 and who passed in the last year.

Those images are encompassed by a turtle representing the voice of the people. At ceremonial dances, women wear turtle shell rattles on their legs. The rhythmic sounds of shells as the women dance is said to symbolize the turtles lifting up their voice in song. The 86 leaves around the turtle shell represent the 86 characters in the Cherokee syllabary. The turtle moves counter clockwise in the tradition of the Cherokee people and its head is representative of the Cherokee language being an integral part of our culture in the East and West still today. The Holiday art was designed by Cherokee speakers and artists Dan Mink and Roy Boney Jr.

Cherokee Nation is the sovereign government of the Cherokee people. We are the largest of three federally recognized Cherokee tribes and are based in Tahlequah, Oklahoma, the capital of the Cherokee Nation. Our headquarters are located in the historic W.W. Keeler Tribal Complex, with sub-offices and service sites throughout Cherokee Nation’s 14-county jurisdictional area.

Originally located in the southeastern United States in parts of Alabama, Georgia, Tennessee, and North Carolina, the Cherokee Nation was forced to relocate to Indian Territory (present-day Oklahoma) in 1838 after gold was discovered in our homelands. The thousand-mile forced removal became known as the “Trail of Tears” and came at a cost of nearly 4,000 Cherokee lives through sickness and harsh travel conditions.

The Cherokee Nation also provides for the safety of its citizens, other residents and visitors through its law enforcement agency, the Cherokee Nation Marshal Service. The Marshal Service has jurisdiction over all tribal and trust land throughout the tribe’s 14-county jurisdiction and is cross-deputized with more than 50 federal, state, county and city law enforcement offices to provide seamless services to everyone in the area.